For last several weeks top three headlines and the front page photo on most newspapers are about Anna Hazare. I hardly read the newspaper these days and do not watch national English channels. But even then I am getting really bored by this circus. My personal problem with Anna Hazare is he is very ugly. He is almost as ugly as Narasimha Rao. So he occupying the news paper front page day after day is esthetically wrong and bad for your eyes :)

But jokes apart, what is going on here? Typical Indian response to an eternal problem. This man sees an opportunity by correctly guessing the middle class anger against corruption. I will give him that credit. Even though I think he himself was pleasantly surprised to see a slightly higher level of intensity. Media grabs the scoop offered to them. Guilt ridden middle class people, who feel they are left out of the great Indian loot (not quite, they are getting their share), lashes out against the establishment, there by feeling good that they are finally doing something for their country, not just sitting there and talking. So start the second freedom struggle. Freedom from who/what? Corruption of all the problems. In this country millions of children die because of malnutrition/disease. Half of the people live for less than a dollar a day, cannot read, do not have access to healthcare, food, justice, clean drinking water, a loo. There are hardly any road, there are three policemen for every one lakh citizens (not sure about this number. But sure that it is pathetically low). Half of the country is on the verge of revolution because of endemic poverty and systematic dispossession. They don’t become issues. If any channel dares show any of these news once in a while even for a few seconds, people just switch out of them. But corruption IS an issue, after all the loot is so BIG, thousands of crores. These numbers appeal to middle class and the media. In my opinion the best social sector investment ever done in India was the NREGA. But it failed because of the massive corruption. Where was our “anti corruption crusader” then? Where was the “civil society”? No way. It’s not glamorous man. Who cares about few hundred rupees stolen from millions of poor people? No channel showed any report on this. Now suddenly they discovered corruption.

I am not supporting corruption. What I am trying to say is that corruption is eternal. And this is not the burning issue. The burning issues are poverty and lack of development. Corruption does not impede development. If anything, it accelerates it. Generally corrupt people are ambitious and ambitious people are key to development. Even with a higher rate of corruption, China lifted 600 million people out of poverty in less than two generations. But to do so, you need to work hard. You need to plan. We don’t do that. We see a few problems and charge emotionally and start a “second freedom struggle” without any agenda, without any plan and above all without an adversary (I hope the people of this country is not initiation a freedom struggle against Congress whom they have voted to power less than three years back!) At the best, Anna Hazare is plain lazy that he cannot start a party, get elected and raise a voice against corruption in the parliament. There he will get all the immunity he wants against arrest and detention. At the worst, he is so arrogant that he believes that only he is right and the voters of this country are all wrong.

I believe that Dr. Manmohan Sing’s government has failed miserably on corruption. At the very least the PM has tolerated corruption in his government to save his “gaddi”. I believe he should go. I believe he should have gone long back. For corruption and more (much more) importantly for his complete failure to check price rise, for his lack of vision to move the country forward. For his inability to lead. But I think this is not entirely right to say that Congress has done nothing against corruption? Mind it, for the first time in the country’s history, three MPs (I think two of them were ministers) are in jail. Another cabinet minister is fired. One high court judge is fired, one top officer and one chief minister is also fired. Are they enough? No. But it’s NOT “done nothing”. I think credit for all this goes for Mrs. Gandhi. And the sooner she recovers and returns back to public service, the better it is for the country. I doubt, at present, anyone else in the Congress has the ability to lead. And man, we desperately need a LEADER. And my personal request, someone good looking :) 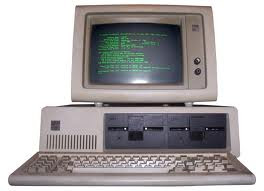 IBM PC 5150 was launched on 12 August 1981. A little over 30 years ago. In thirty years it has "changed the world". Now "changed the world" is such a cliche. Everything changed the world from automobile to telephone to condoms. So in that sense it really did NOT change the world. We are still stupid, insignificant, mortal human beings visiting planet earth for a roughly average 65 years. Nothing changed on that front. But on the other hand, the impact of PC on our daily lives is far more than the convenience of paying bills and buying train tickets from our desk. It DID change our lives in more profound way.

I think the most profound impact of computers in our lives is the way we think. People who uses computers thinks more objectively that people who don't. While phrases like "do it in your free cycle", "I have no bandwidth left" may sound geeky and mere phrases, I think they are not mere phrases anymore. They have invaded our thought process. We do tend to think the way computer thinks rather than the way humans used to think. Life is now a sequence of instructions to be processed rather than a sequence of experiences to be felt and enjoyed/endured. Improving things is like optimizing a program than making life better. A phone call from my father when I am in a party seems like a NMI while doing an important subroutine. I think I have now less feeling and more computing than I used to be when I did not know computers.

Now that can as well be just because I have grown old. But I have a suspicion computer did play a role here.

I first saw a PC (A little better than the one in the above picture) in 1989 in our Jadavpur University, Computer Science lab, in August! We had one that was exactly same as the above picture in a different lab. It is amazing that guy from a backward region of such an impoverished country and from a quite poor background will work on the most advanced machine within eight years after it was built. We also had a CDC Cyber 180 and a Norsk Data ND-500 machine in our labs. Both of these machines were less than 10 years old and I think used to cost thousands of dollars.

Our tuition fee for undergraduate studies in 1989 was IIRC Rs 20/month. When I was thinking about this last night I felt real gratitude for my country and the people on my country whose contribution made it possible.
Posted by subhendu at 2:43 AM